Recent reviews of Racing to Zero:

09/16/16
Hoodline (Online)
Interview Feature
by David-Elijah Nahmond
Online only
http://hoodline.com/2016/09/in-new-documentary-duboce-triangle-producer-spotlight-s-sf-s-zero-waste-mission
09/15/16
SF Weekly (Print Weekly)
Capsule Review
by Sherilyn Connelly
In print and online
http://www.sfweekly.com/film/film-film/racing-to-zero/
09/15/16
Bay Area Reporter (Print Weekly)
Review
by Erin Blackwell
In print and online
http://www.ebar.com/arts/art_article.php?sec=film&article=1534
09/16/16
Marin Independent Journal (Print Daily)
Interview Feature
In print and online
http://www.marinij.com/article/NO/20160915/FEATURES/160919880
FILM SYNOPSIS
By Eddie Fleisher, author and film reviewer for the Cleveland International Film Festival
“Trash. Garbage. Junk. These are words we commonly call the things we throw away. But in San Francisco they have a completely different perspective. They see “waste” as “resources,” materials that can always be recycled and turned into new things. They give purpose to the stuff most people may see as otherwise useless. Dedicated to protecting the environment, they’re aiming to make the city 100% waste free by 2020. It sounds like a daunting goal, but as this film reveals, they’re surprisingly close to doing so.
“Now, you may wonder how exciting can a documentary on trash be? The short answer is very. The city’s passion for going green is unbelievably contagious. For everyone from the mayor, to those who work in the field, to the citizens – the idea of ensuring everything can be reused has reached a collective fever pitch. Their mission has given them a sense of pride that’s overwhelmingly inspiring. The innovative methods and programs displayed in RACING TO ZER0 provide a blueprint for change that can hopefully be applied to all of America.” 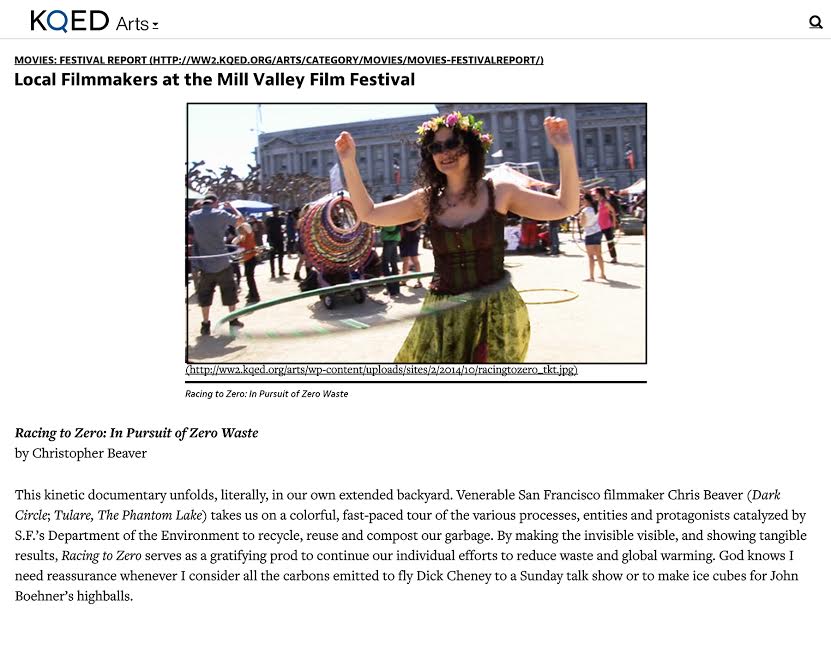 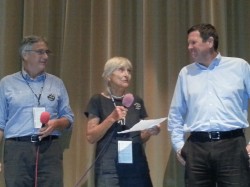 My good friend, Diana Fuller, who’s been involved in the arts, writing and film culture for a long time, but who never made a film before “Racing to Zero,” talked to me about three years ago and said she had decided to make a film about trash.  Given the proximity of her house to the Castro Street “gayborhood,” I jokingly asked her if it was about a tranny rock band. She said, “No, it’s about something very important to me, how we deal with our garbage.”  It wasn’t clear at the time exactly what the film would be, but in the intervening three years, an amazingly focused and wonderfully positive film has emerged, made by Diana as the Producer, and Christopher Beaver, the director and a seriously engaged team of people behind and in front of the camera. 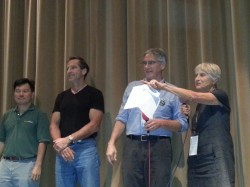 At the Mill Valley Film Festival screening on October 4th Diana got up in front of a sold-out house, and told the audience, “We didn’t start out with the idea of presenting garbage with a big smile,” but that’s exactly what the film does.  Diana and Christopher chronicled the efforts of the City of San Francisco to reduce the amount of garbage going into landfills to zero by the year 2020.  The portray the effort of city officials, the Recology Company (San Francisco’s private garbage collector), and numerous recycling and re-use companies to take what people throw away and turn it into resources and new assets and businesses with real potential for success. 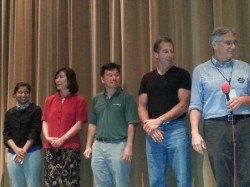 Amazingly, all the people in the film seem very happy to be dealing with garbage.  They do, in fact, talk about what they do with a big smile on their faces.  I think this comes from taking a good idea, and turning it into a successful reality.  While “zero” trash may never be a reality, the film shows that it’s possible to make a big difference in how we “see” our trash and how we deal with it through education and legislation.  San Francisco’s efforts have already achieved amazing results, with 80% of trash now being recycled.

By dividing the things we throw away into three color-coded trash receptacles: Green for composting, blue for recycling, and black for “garbage,” we have greatly reduce the amount of trash destined for landfills.  We have also created sustainable ways to deal with our compost and recycling, so that it’s no longer a birth to death scenario for these items, but birth to re-birth success.

Editor Maureen Gosling took many hours of footage, shot over a long period of time, and transformed the material into an amazing success story.  It’s not only about science and technology, but the joy that comes to people when they do the right thing, take a good idea and turn it into reality.  It shows us very clearly that everyone problem facing our planet can be solved, and that in the process we can heal both the planet and the human spirit that has been so beaten down by greed, capitalism and ignorance.

San Francisco’s waste reduction plan, and this film, are a true inspiration.  At the end of the screening, during the Q&A, I remarked, “When I was thinking what I’d include in my review, I wasn’t certain.  But after watching the film, it’s very clear that the film is a great example of art imitating life.  But now we have this art, your film, to show that life can also imitate art, and I hope that you get this film out there into the universe to show people that they can take a good idea, and turn it into reality.”

The fact is that we can solve any problem facing the planet and it’s people:  global warming, hunger, loss of rainforest, threats to endangered species, finding new sources of energy, everything that needs to be fixed to keep this planet healthy and happy.  This film is the blueprint.  I felt honored to be in the same room with all the filmmakers and those appearing in the film.  They are real heroes.